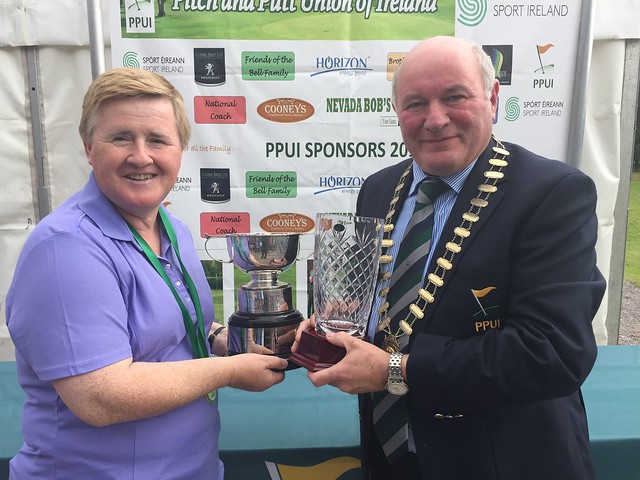 National Ladies Strokeplay by the 0's

This weekend should have seen us heading to Kilbeggan for the National Ladies Strokeplay. In its place John Manning looks at the event by the 0’s in the following piece.

Limerick left-hander Nancy Tuohy (Catholic Institute) won the 1970 National Ladies Strokeplay Championship when she scored eight under par 154 for the 54 holes event, which was played in atrociously wet and windy conditions at the McDonagh course in Co. Kildare. Runner-up was the holder, Clare Keating (Woodvale) on 159.

After the 1st 18 holes, Nancy led by four shots with a three under par 51. Having repeated that score for the second round, she led the field by eight shots. Clare summoned up a tremendous final round display in an effort to retain her title, scoring a fine 49. Nancy continued her consistent performance with an excellent 52, to secure a first and ultimately only National Strokeplay victory for the two-time Matchplay victor.

In the Intermediate Championship, Joan Kavanagh (Mellows) captured the trophy with a score of 183. Second was Nan McMahon (Royal Meath) on 187. Cork players dominated the Junior Championship. Mary Madden, a comparative newcomer from the Douglas club, returned 192 to clinch the title. Runner up was Angela Roche, (Rocklodge) who carded 196.

Ann Ginnane (St. Annes) won the first of her three Strokeplay crowns with a score of 97 at windswept Athlone in 1980. Clara’s Margaret Hogan was second, five back. Ann scored an opening round of 49 to lead Margaret by one and a superb second eighteen of 48 gave the former Irish Girls’ Strokeplay Champion from Cork her five shot cushion.

Local member Teresa McCormack won the Intermediate title with 112, which was three better than second-placed Roisin Brophy (Shandon). Junior champion was Bernadette Walsh (Campions) with a 116 tally, three better than Mary Carey (Fermoy). The new Junior Champion’s eighteen-hole splits were extraordinary. Bernadette improved 14 strokes on her opening 65 to post three under for the second round and clinch her win.

The circuit moved to Crosshaven for the 1990 National Ladies Strokeplay championships on June 24th. Young Gail McDermott (Portmarnock) shot 101 to tie with holder, Chris O'Shaughnessy (St. Annes). Gail prevailed in a nine-hole play-off, 24 to 29. Chris looked set to defend her title successfully when she opened with a 48 to earn a three stroke halfway lead over Margaret Hogan (Tullamore) and Geraldine Ward (Portmarnock).

One under after eighteen, Gail really got motoring on her second round and closing birdies on 17 and 18 saw the Portmarnock youngster round in 101 overall. Chris was seven under with six to play, but despite some close shaves, couldn’t secure the winning birdie. When Gail started 2, 2 and Chris opened up with two bogeys; the play-off was effectively over after two holes.

111 clinched the Intermediate title for home player Ros O'Rourke. Level on 57 after the opening round with Bridget Guilfoyle (Kilbeggan) and club-mate Mary Kelly, Ros matched par with a second round 54 for a three stroke winning margin over Bridget Guilfoyle.

Marina O'Rourke from the Cloghogue club in Newry won her second National Ladies Strokeplay championship with a spectacular display of first-class Pitch and Putt at Ballinlough on Sunday July 9th 2000.  Marina, who was previously winner at DCBS in 1997, carded opening rounds of 49 and 51 in this Lynch and Manning Ltd. sponsored event.  That gave Marina an eight under par total of 100 and saw her lead the twelve qualifiers into the final round of this 54 holes championship.

Peggy Campbell (Glenville) was in second place on 101 after a fabulous 46 second round.  1998 champion Bernadette Coffey (St. Bridget's) and 1995 victor Sheelagh Elmes (Portmarnock) were joint third on 103.  Bernadette Coffey exerted strong pressure over the opening holes of her final round.  She aced the second and birdied the third.  Having got to -9 early on though, the St. Bridget's player faltered.   She dropped four shots before birdieing the 18th to clinch third place.

Marina opened her final round with five birdies in the first six holes to take the Championship by the scruff of the neck and was never in trouble thereafter. A seven foot birdie putt on the home green rounded-off a superb three round aggregate of 14 under par 148, which gave the Down inter-county star a seven shot victory. Peggy Campbell held on over the closing holes to finish second on 155 –at that time her third runners-up placing in a national championship (Matchplay '96 and Strokeplay '98/'00). Jean Cooney (Bissell) shot a 54 final round to take fourth and the final exempt qualifying place for 2001.

At one stage in the final round of the Intermediate Championship, Bernie Dunne (St Bridgets) looked a certain winner.  Bernie had improved her four shot 36 hole advantage to five and seemed in control.  With the finishing line in sight, the Kilcullen player appeared to get little nervous and began to fritter away shots. By the time they reached the 18th tee, Bernie's fellow competitor, Wendy Leech (Seapoint), who was third in the 1997 National Ladies Junior Strokeplay championship, was a shot clear.

Bernie pitched to the right edge of the final green and holed the putt for birdie leaving Wendy to make a testing three footer for par and a 9-hole play-off. Bernie took the early advantage in the extra holes with a birdie at the 3rd, which Wendy Leech bogeyed.  They were level again after seven holes. Bernie Dunne chipped dead from over the 8th green to edge one ahead after Wendy's par saving putt lipped the hole. Bernie Dunne immediately pitched to within three feet of the uphill 9th to clinch a two shot win and Kildare's third success in this Championship in five years. Crosshaven's Bernie O'Connell finished third on 168.

It was a second national title on the day for Kildare when joint 36-hole leader, young Claire Winder, resplendent in the green of McDonagh, shot a total of 177 to win the Junior Championship by two shots from another young player, Kim Cuskelly of Tullamore.  A third youthful performer, Sarah Lee Carroll (Erry), finished third on 181.  With just four holes to go, Claire Winder's playing partner for the final round, Maura Dooley (Ballinlough), looked like she would give the home supporters something to cheer about. Maura, who had tied for the 36-hole lead, was still level with Claire Winder at that point. A six over par run over those closing four holes saw her fall back into fourth place.

Geraldine Ward (Portmarnock) completely dominated the 2010 National Ladies Strokeplay Championship at Cunnigar. Opening rounds of 50 and 48 gave the Portmarnock legend a five stroke 36-hole cushion over Eleanor Walsh (Fermoy). A closing 49 saw Ger home by a 10 stroke margin over holder Tracey McGrath (Erry) who finished with a 51. Margaret Hogan (Tullamore) was third on 158, her final round 53 edging out Eleanor Walsh on the tiebreaker.

Two strokes clear after 36-holes of the Intermediate championship, Bernie Somers (Cloghogue) added a final round of 59 for 174 to just hold off Donna Cockwell (Cunnigar) who posted 176. Kathleen Carton (Kilbeggan) was third, narrowly pipped by Donna Cockwell on the final eighteen.

Tied for the lead heading into the final round, Mary O'Neill (Cunnigar) closed with a 62 for her 187 aggregate and a four stroke Junior Championship win over her club-mate Corinne McGee. The other 36-hole leader, Jacinta Nugent (Tipperary Hills), finished third on 193.